What is the Sandbox?

The Augmented Reality (AR) Sandbox is an interactive, three-dimensional, augmented reality exhibit that can be used as an educational tool to explore the importance of water, hydrology, earth science, and environmental studies. Eclipse Geomatics built the AR Sandbox using open source software and blueprints developed by the University of California (UC) Davis’ Keck Center for Active Visualization in the Earth Sciences in cooperation with the UC Davis Department of Geology, the Institute for Data Analysis and Visualization (IDAV) and the UC Davis Computational Science and Engineering Center (CSE). The objective of the project was to spread public awareness and educate people on the many physical landscapes such as mountains, rivers, and lakes and explore the properties of nature. More information on the UC Davis AR Sandbox program is available here.

Eclipse Geomatics has partnered with the Bulkley Valley Research Centre to initiate an educational watershed-based program highlighting the AR Sandbox and its features. Our sandbox is currently one of five models in British Columbia.

The AR Sandbox is a 40″ x 30″ table that holds up an open-topped sandbox filled with Sandtastik Sand. People are able to interact with the surface of the sand by moving, moulding, and digging around in the sand. Above the table are two apparatuses pointed down onto the table: a short throw projector and a Kinect device. The two devices are attached to a high-end graphics computer that allows the projector to mirror the monitor display down onto the sand. The two cameras work in tandem to detect the displacement of sand and adjust the display accordingly. For example, when a pile of sand is formed into a mountain, the computer will identify the shape of the sand and generate topographic elevation bands to represent the mountain. 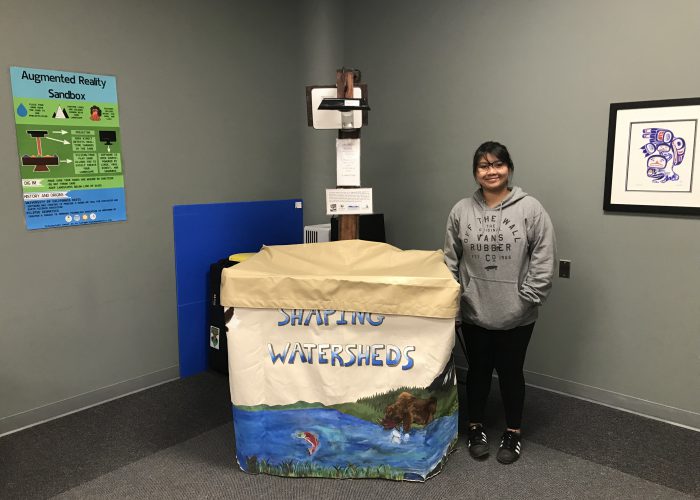 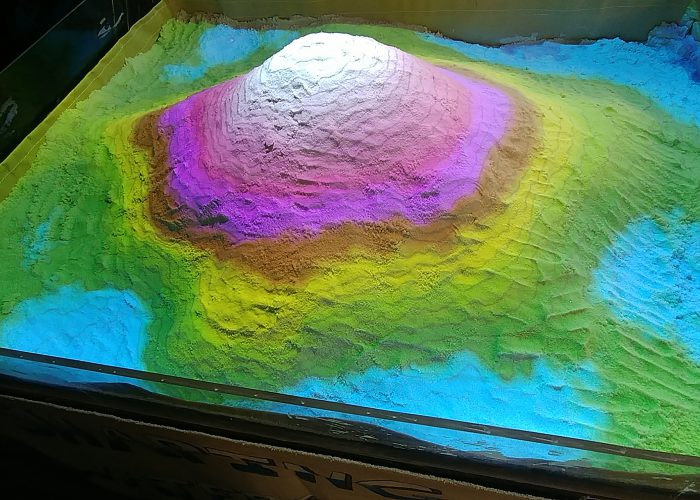 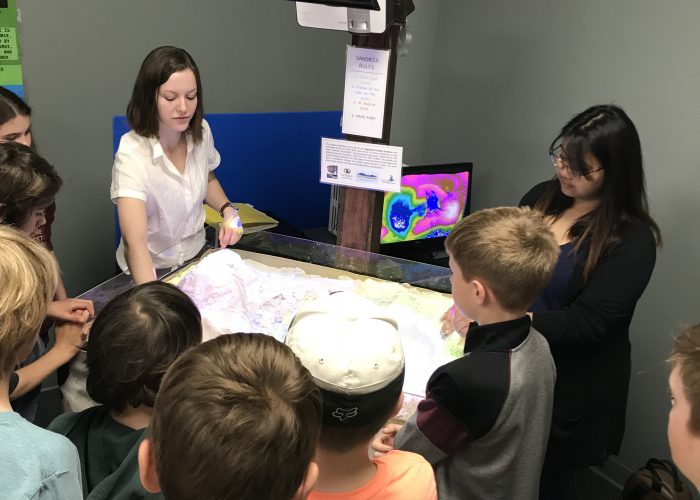 The sand we use is no ordinary sand found at the beach! It’s a safe-to-use type of sand called Santastik Sand which has features of a shallow angle of repose and apparent projection properties. The sand has been tested and ensured there are no traces of any type of potentially harmful minerals commonly found in beach sand. We also encourage hand washing before and after each use to maintain a clean environment of the sand.

The AR Sandbox allows users to create topography models by projecting contour lines onto the sand in order for users to visualize different levels of elevation. The closer the contour lines are together, the steeper the slope. Additional features include the visual effect of simulating fluid motion over the landscape such as water, snow, ice and lava. The simulation of rain is activated by spreading your hand out and moving it above sand level. Once activated, users can observe how the movement of surface water changes with different mountain heights and slopes, and how rivers and lakes are formed.

Eclipse Geomatics has partnered with the Bulkley Valley Research Centre (BVRC) to facilitate and expand educational opportunities for the AR Sandbox. Please contact the BVRC to book the AR Sandbox for your educational event or program.